Hong Kong native Wallace Chan began his career carving precious stones. Showing an innate gift for this craft he developed what he later called the “Wallace Cut” an adaptation of the medieval intaglio and cameo carving techniques that creates a realistic and three dimensional carving inside a crystal with multiple reflections. From this detailed and finely calibrated work, the move into jewelry was a natural progression. But this is where comparisons with traditional techniques and styles end as there is nothing conventional or expected about Chan’s work. His jewels looks like nothing else and had me wondering what on earth I was looking at: what are these gossamer fine layers of smokey crystal, where are these extraordinary colors coming from and how can one stone appear to hover inside another? Just how has he managed in hard stone and cold metal to capture the frailty of a butterfly’s wings or the wispiness of a celestial cloud? How can he create such extravagant, almost baroque jewels that are always original and breath-taking? With a Confucian-style long beard and black tunic, Chan embodies the spirit of Asian philosophies and religions in his work and aims to delight the eye as well as touch the soul with his interpretations of nature. Chan tells me that he uses real butterflies to recreate their exact anatomy and in one brooch, he even encased the wings between layers of carved rock crystal and mother of pearl allowing the powdery natural color of the insect’s wings to glow through the transparent stone. His ability to turn the ordinary into the extraordinary is the mark of a true artist jeweler. As well having a genius talent for carving and the most painstaking craftsmanship, he has also put in time mastering materials such as ultra-light titanium to create these jewels that are as delightful as Nature itself. Wallace unites invisibly the metal ‘skeleton’ of his works with the gemstone ‘flesh’ by inventing new setting techniques. Not satisfied with conventional claws or collets to hold stones he has developed what he calls the “the diamond claw setting method” and the “inner mortise and tenon setting method”. The first one does away with metal claws and actually uses diamonds and gems as the setting which sounds as baffling as the result is sublime. The second method adopts the Ming-style architecture mode of joining materials by cutting stones to form a mortise and tenon joint, which believe me, is as complex as it sounds. All you need to know is that it looks out of this world and allows for seamless flows of form and a richness of color uninterrupted by metal. Wallace Chan’s jewels have captured the imagination of jewelry collectors and experts around the world. 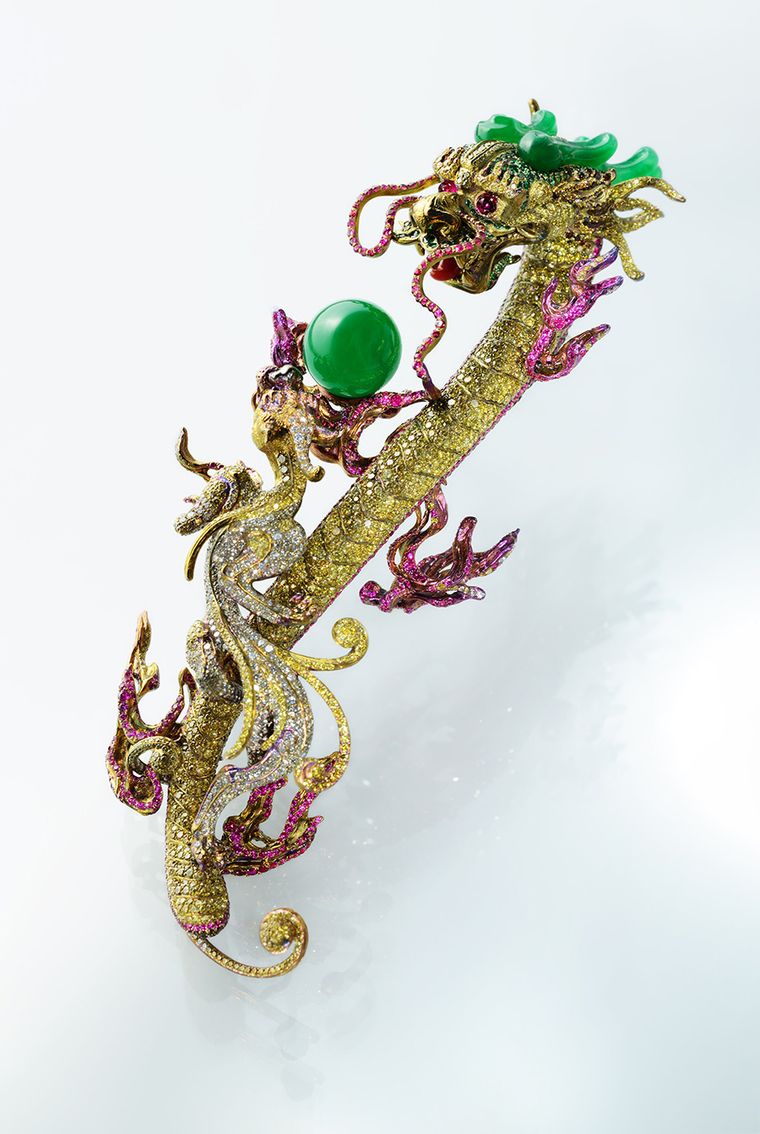